By Travel With Me in Testimonials, Trip Reviews

We have recently returned from Travel with Me’s first ever exclusive tour to Borneo. What an incredible adventure we have had.

Our arrival day was spent at a resort hotel lying around the pool and relaxing after our night flight so by the next day we were ready to go. 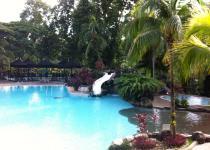 Our guide picked us up and we headed out to Selingan Island, famous for the Giant Green Sea Turtles nesting on the beach, this is a year around activity making this a very unique place. We settled into our bungalows and relaxed on the small island exploring and checking out local wildlife until the early evening. After enjoying dinner together we were ready for the “turtle” call. Armed with torches and cameras we waited patiently. 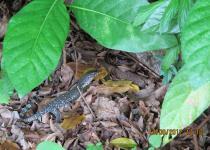 When the ranger called the magic word “turtle” we excitedly raced down to the beach to watch a magnificent turtle lay her eggs which were then collected and buried in the hatchery for safe keeping. Our final activity on this evening was to release the new born hatchlings (from previous collections) back to the sea where it is hoped that some day they will return to continue the cycle. 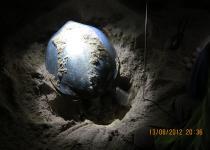 27 turtles lay their eggs on Selingan Island that night while another 19 lay their eggs on the neighbouring two islands. Almost 3500 eggs were transported to the hatchery on that one night to ensure a better chance of survival. This was an incredible experience to be a part of and wonderful to see such a great effort being made to protect these beautiful creatures. 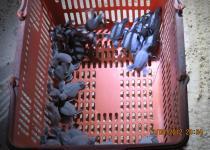 We had timed our trip to coincide with the Sandakan Memorial service and although not the main reason for our journey it certainly became a highlight for many. The service was in honor of the thousands of POWs and local people that died in the forced Death Marches from Sandakan to Ranau in 1945. We were truly honored to be a part of the service and we must never let this tragedy and the people that died be forgotten. 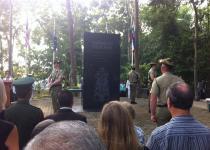 Before heading out to the jungle we spent a couple of nights at the Sepilok Nature resort exploring the Orang Utan rehabilitation centre and the Rainforest Discovery Centre. Sepilok is where rescued Orang Utans are bought and they are trained here to live in the wild. Feeding platforms are filled twice a day and visitors can watch as these beautiful creatures come in for food. Once they stop coming to the platforms it is deemed that they can survive on their own and are released into Tabin National Park (twice the size of Singapore) where it is hoped they will live out the rest of their lives in peace. 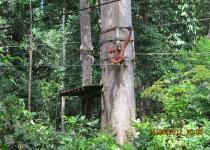 The next week of our journey involved traipsing the jungles of Sabah in search of wildlife and unique flora. We journeyed by boat up the Kinabatangan River to our wonderful lodges and enjoyed three days of boat safaris with the best guide ever, Ron. Early morning and evening we would head out in our boat with Ron to check out the wildlife on shore, as well as in the air (amazing birdlife) and the water (some very big crocs). We even had a spooky night cruise to check out the nocturnal wildlife and were lucky enough to see some wild cats and quite a few owls. 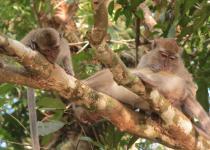 We consider ourselves a very lucky group as we saw an Orang Utan (man of the jungle) in the wild as well as a large herd of Pigmy Elephants. We also saw many Macaques and what quickly became a favorite for the group, the Proboscis Monkeys. If you love birdlife then this is the place, we saw many hornbills and Kingfishers as well as the very rare Storms Storks. 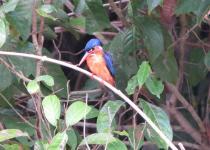 An overland trip from Kinabatangan took us to Tabin National park where we spent another three days observing the local wildlife, this was done on walks and an open jeep although we didn’t have to go too far as we observed a Sun Bear close to our bungalows and one morning a Pigmy Elephant walked right past where we were eating breakfast. Otters were seen playing in the stream along side the bungalows and you woke up to the sound of Gibbons and other jungle noises every morning. We saw a lot of wildlife including Civets, Pythons, monkeys, many elephants, giant squirrels and much much more. 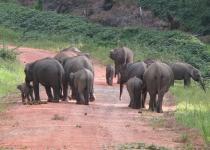 We bid farewell to our wildlife portion of the journey as we travelled the rough road to Lahad Datu for our flight to Kota Kinabalu (KK to the locals and capital of Sabah) to start the relaxation and final part of the trip. Our beautiful five star resort was waiting for us with easy shuttle service to the town and some big shopping centres to entertain the ladies. The newest shopping centre, Suria Sabah, was officially opened early this year and more are on the way. Some of us braved the night markets for some amazing fresh BBQ seafood and an interesting desert that consisted of yam icecream, jelly, sago with some macaroni and corn! A strange mix but very tasty. Lots to do in KK, including climbing Mount Kinabalu and visiting neighbouring islands which are on the list for next time. 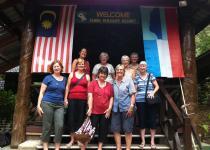 Our Borneo trip was spot on with a great mix of Nature, Wildlife and Relaxation, who knew such an incredible adventure could be found so close to home? Travel with Me will run this tour again in 2014 and expressions of interest are being taken now. Join us next time as we explore Sabah in a small group and make new friends while experiencing this very diverse country. The sun bear sanctuary is due to open this year so that will definitely be on our list for next time.

Annette (Director of Travel with Me)

Join Travel with Me

Your Travel with Me Team

Join our Travel with Me Club